Scientists have decoded the genome of the Sumatran rhino – one of the most threatened mammals on Earth.

Its genetic blueprint shows that populations have been in decline for a very long time.

The rhino’s troubles began during the last Ice Age, when its habitat shrunk, says a US team.

Since then, human pressures have caused numbers to dwindle further. There are now thought to be fewer than 250 individuals left in the wild.

“This species has been well on its way to extinction for a very long time,” said study researcher, Terri Roth at the Center for Conservation and Research of Endangered Wildlife at the Cincinnati Zoo and Botanical Garden.

The Pleistocene is the geological time period that lasted from about 2,588,000 to 11,700 years ago, spanning the world’s most recent Ice Age.

The researchers sequenced and analysed the first whole Sumatran rhino genome from a sample belonging to a well-known male at Cincinnati Zoo.

Ipuh lived at the zoo from the 1990s, but died four years ago at the age of 33. He sired three offspring, more than any other Sumatran rhino in the world, and deposited his genetic material in a gene bank. 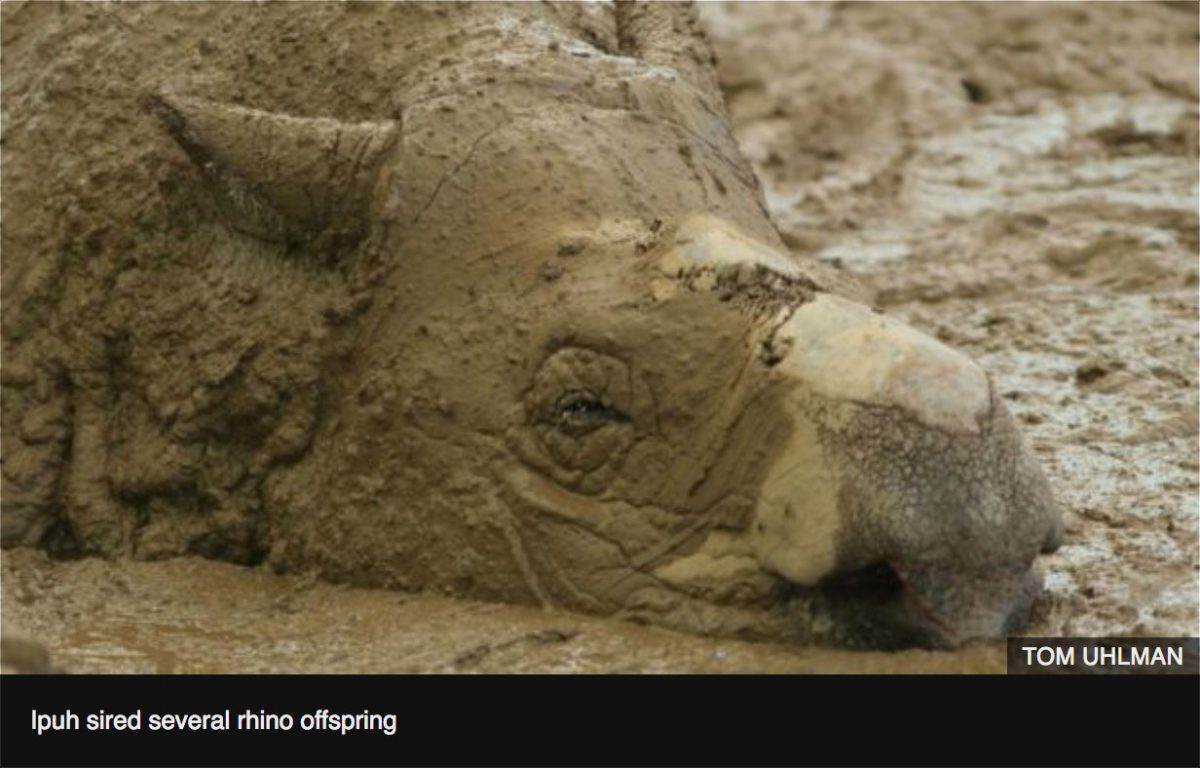 From his DNA, scientists were able to model the population history of the Sumatran rhino.

By about 12,000 years ago – the end of the Pleistocene – Sumatran rhinos had lost much of their suitable habitat, like many other large mammals.

Land bridges exposed during the Ice Age connecting the islands of Borneo, Java, and Sumatra to the Malay Peninsula and mainland Asia had disappeared into the sea.

By 9,000 years ago, numbers had declined dramatically due to climate pressures.

“Their population bottomed out and never showed signs of recovery,” said Prof Mays.

“The Sumatran rhinoceros species is hanging on by a thread,” Dr Roth added. “We need to do more to save it.”

The Sumatran rhino once roamed from the foothills of the Himalayas in Bhutan and north-eastern India, through southern China, Myanmar, Thailand, Cambodia, Laos, Vietnam and the Malay Peninsula, and onto the islands of Sumatra and Borneo in Indonesia.

The species is now confined mainly to Sumatra and is listed as Critically Endangered by the International Union for the Conservation of Nature (IUCN).

The IUCN says over-hunting for its horn and other medicinal products has driven the animal to the brink of extinction.

There are over 20 Sumatran rhinos in captivity, mostly in Indonesia and Malaysia, with a few in the US.

Hundreds of large mammal species disappeared after the last Ice Age, due to climate change, loss of vegetation and human hunting.

Genetics gives researchers a window into the past; from a single whole genome sequence, they are able to model how the size of a population has changed over time.

This is particularly useful for ancient DNA or in very rare animal populations; it has been used to study the giant panda, passenger pigeon and the woolly mammoth.